Carter is supposed to sneak into the floating-bike garage. One of the ways he can do that is to hop through the red pipe hanging below the construction. The player here is expected to develop a special sense of timing between mouse clicks (or touch for mobile devices). If the player did not click for a while (a couple of seconds) then Carter's arms would get tired and eventually fall. By clicking on either arrow Carter will hop one 'step' to the corresponding direction. The time between clicks is also vital, clicking too fast would result in a fall as well due to an imbalance issue. 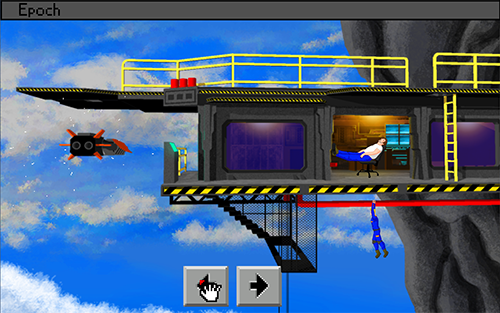 This brings an issue to my mind, about control skills in Point and Click games. I used this feature in anastronaut 1: The Moon Hopper, precisely when the player breaks a window in a spaceship causing an atmosphere leak. He was supposed to be grabbing hard into a dent by keeping the mouse button down at a specific region in the room for a few seconds.
Posted by AJ at 6:47 AM