Here's an old man raking some dry leaves off the road. He has hearing problems so you'd have to use sign language in order benefit from conversation. You can also find something that'll be useful for him to listen to you though. The dialog icons will automatically change into the non sign language option.

After creating the room for the interior of the antiques store, I sat back and looked at it from a little further distance. It is still not fully done and already has a lot of details. There are more vases, chandeliers and old gadgets to be added. So the room will be packed with tons of trivial details. 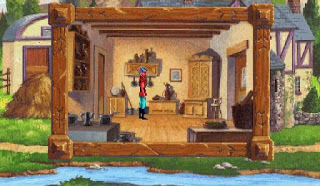 I remembered a technique used in King's Quest V when King Graham enters some stores and houses. Out of the massive amounts of respect I have towards King's Quest V, instead of checking videos or screenshots online, I ran the game. And when I run King's Quest V, I must play it to the end :) 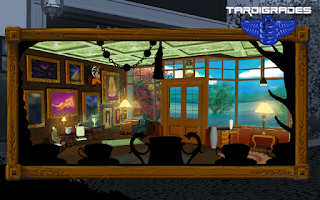 The idea I adapted is to use the exterior of the store as a background, while the interior is framed as a GUI with whatever desired bordering. As a cameo I used the frame used by King's Quest V with little alterations. I also desaturated the exterior background since the interior is very colorful.
Posted by AJ at 11:04 PM 4 comments:

The making of the vendor