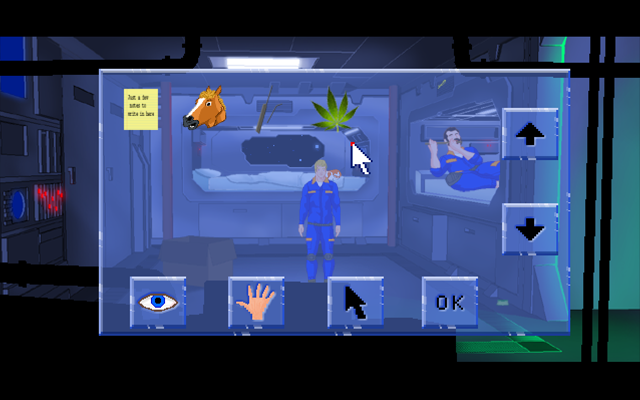 Manipulating characters would be much interesting with this inventory item. Find the right place and time, then get the items and information you may need from other characters.
Posted by AJ at 7:16 AM No comments: 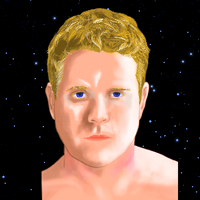 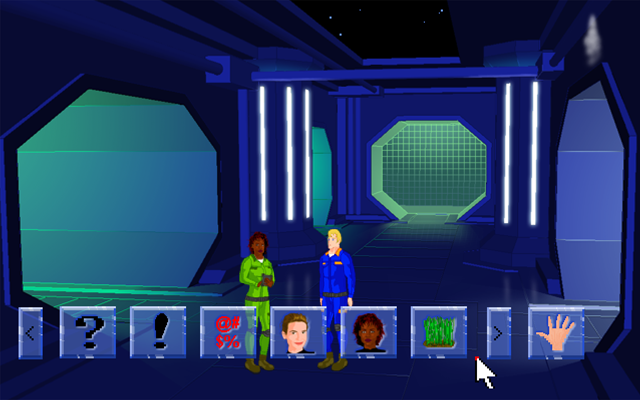 Carter having a little chat with Yolanda in one of Marsi-3's corridors.

Yolanda is the communications engineer on Marsi-3. She is responsible for all inter planetary messages sent and received to and from Marsi-3.

Yolanda doesn't have an 'office' aboard the ship. She keeps wandering around Marsi-3's rooms and corridors making sure everything is under control.

Yolanda is a unique character in Epoch. Whenever she's in a room with another NPC, you can always invite her to a three-way chat.

Games And Giving Away Grasp

Thinking outside the box, some adventure games developers add new elements to their games. This article will talk mostly about metrics and meters. Perhaps one of the most famous adventure games using meters is Sierra's Hero's Quest. The usual metrics of games' characters would always be strength or stamina, mana and so on. However in HQ they added more than that. There are fighting skills related metrics and other puzzle-solving oriented metrics such as climbing skills.

Recent point and click games started using more stats for characters. To be fair, this is good thinking and requires a lot of work in game-development terms. However, should the player be aware of how smart the game is? I think this is a critical forked path as some players love to be challenged while others wouldn't really sink into the idea of point and click games introducing such an element and see it as distraction from the main gaming experience.

I think it's a great idea to let the players know they are dealing with a smart game by all means. But there is a fine line between introducing smartness to the player for respecting and challenging their minds, and using smartness solely for showing off. This is the job of good design, which raises the question: What is the part of the game that players cannot see at all?

Code. Put most of the smartness in the background code. Some developers use meters and GUIs to display stats. This could be handy depending on the type of game and the targeted audience as well. But for myself, I can't imagine games such as Space Quest or Day Of The Tentacle having 'character strength' and 'throwing skills' being developed and displayable through out the game.

Since Epoch has many alternative paths; NPCs and dialogues, I had to introduce such elements in the game. But I hid them in the code and left their discovery totally depending on the players' intuitions and actions. One of the metrics I used is an integer variable for each character called characterName_mood. This variable is randomly initialized at the start of the game between -3 to +3 having positive values representing good mood and negative values for upset characters. Your actions during the game can change the values of each character's mood just like in real life. You can be nice to a character or give them an inventory item to add to their mood variable. This of course would make progress in the game and help solving some puzzles. However, other alternative puzzles could depend on upsetting some characters. In both cases, dialog options and replies change due to characters' moods.

characterName_mood is only one variable among many others in the game. It is hidden in the code and can only be sensed when interacting and talking to characters. So instead of having a displayed metric showing the variables' value, you can simply get a rough estimation from the replies of the characters.
Posted by AJ at 10:31 PM 4 comments:

This is a puzzle where you need to reset an emitter in order to send instantaneous messages using quantum entanglement through extremely long distances.

The puzzle can be solved in different ways:

I should mention a few points here. 'Taking a spacewalk' requires solving puzzles and hiding from some characters. Finding the emitter in space can either be by trial and error (remember the previous video showing how the player can leave marks in infinite maps) or by finding a map. Programming the emitter needs variables and methods that can be obtained. If the player already has a background on coding then this task would be a little easier. The last option 'Convincing another character to do the task' requires solving a lot of puzzles and massive socializing with other characters in order to trigger the right events.

Now you can write down your notes in-game style. Passwords are randomly generated in Epoch. Instead of writing them on a piece of paper you can simply use this notebook.

Figure 1 illustrates the straight forward puzzle solve. Your goal is to get to the orange circle starting from the purple one on top. You do a couple of interactions, then an event gets triggered allowing you to perform one last interaction that would lead you to your goal.

However, in figure 2 you get a choice in the process of getting to your goal. After performing one interaction, you can either do one of two tasks, one would lead to the failure of getting to your goal (usually death) and another that allows you to proceed and solve the puzzle. This appears more sophisticated in a flow chart while in reality it is still considered straight forward. Because being stuck figuring out a single task to perform in order to proceed the game is equivalent to dying, at least for me. 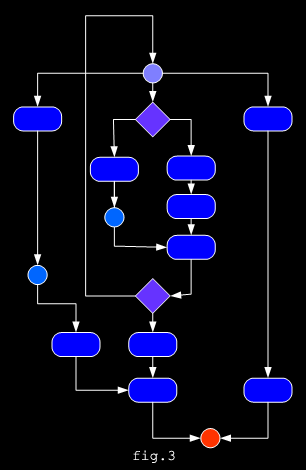 Figure 3 illustrates Epoch's approach to a nonlinear adventure game. Starting from the purple circle at the top, you get three branches to go through. The left branch triggers an event and then leads to the goal. This branch is made short and easy intentionally, as for later as a punishment, the triggered event would make it a little harder to solve a future puzzle.

The branch on the right is a very tricky one, in the figure it seems as if it's the easiest way. In reality it depends on high skills of the player. For instance, if the task is picking a lock and the player knows how to pick locks in real life then this is the branch for you. Or if the player is good at aiming, has quick response time and so on, then these physical skills get to the goal with less trouble what's so ever.

Figure 3 is an actual illustration to obtain an inventory item to perform a specific task in Epoch. To add more depth and free will, the whole task has an alternative solution as well.

Figure 4 shows that a single goal may be obtained by different approaches. Each approach is unique in its own way. The cool thing is you can hop from one approach to another anytime (unless an approach is written in a specific way to lock the player for example in a room where another approach should be done somewhere else...)
Posted by AJ at 11:14 PM No comments: